Some thoughts on Dylan's "Murder Most Foul"

Some thoughts on "Murder Most Foul", after over a year: 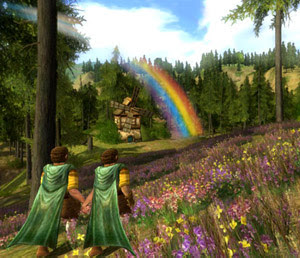 What will NOT be happening in Middle Earth Online (Image from Salon.com ) In a decision sure to negatively impact their subscriber numbers, Turbine, makers of Middle Earth Online, have decided not to allow gay marriage in their game. Indeed, due to the gay marriage controversey the marriage feature has been cut from the game entirely : Nik Davidson is a game designer at Turbine, the Westwood, Mass., company producing "The Lord of the Rings Online: Shadows of Angmar." The game has been in beta (a test version) since September, and during discussions of new features for the game, which was officially released Tuesday, the design team wound up in a heated discussion over what restrictions should be placed on marriage. They debated not only gay marriage but also marriage between members of different species. Finally, the game's executive producer settled the matter by pulling the entire marriage feature. (HT: GamePolitics.com ) In fairness to Turbine, gay marriage is not
Read more 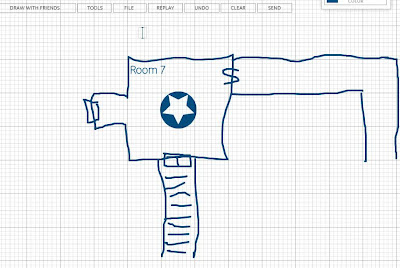 This is fun: you can have an online whiteboard that you invite people to join. Courtesy of our corporate overloards at GE. It's a bit slow, but seems useful. Here's a picture I drew:
Read more 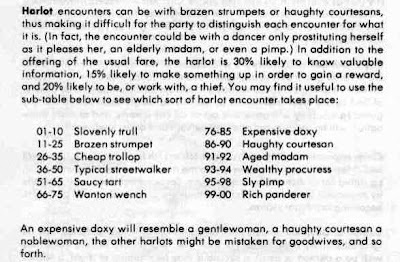 GenCon Indy approaches, and so I'm not posting much. I hear D&D co-creator Gary Gygax will be at the convention this year. If I run into him, I want him to autograph one of the most ridiculous pieces of gaming weirdness ever to make it into a mainstream AD&D publication. I'm speaking, of course, about the infamous random prostitute generation table in the 1st Edition Dungeon Master's Guide . That book included a random encounter table for cities; "Harlot" is one of the entries. Here is the Harlot entry, reproduced in facsimile for your delectation: Sadly, subsequent editions of the Dungeon Master's Guide lack such useful prompts to the imagination. Dungeon Masters are now forced to improvise descriptions of harlots, should such be encountered by an adventuring party. Unless, of course, the Dungeon Master owns a copy of the 1st Edition DMG or is lucky enough to see this blog post. In the interest of fairness and gender equality, this table should
Read more